Press release from EICMA below. I’ll post better pics as I find them, one from IG At the bottom. Disappointing but not surprising not to see a V85-powered V7 model yet. Likely for the 100th debut next year at EICMA.

Making its debut at EICMA 2019 is Moto Guzzi V7 III Stone S, a sportier and more sophisticated interpretation of the Mandello best-seller. The only member of the 2020 V7 III family to be produced in a limited edition, Moto Guzzi V7 III Stone S will be manufactured in just 750 units.
Distinctive elements of the Moto Guzzi V7 III Stone S are its beautiful satin chrome fuel tank, the upper part of which is wrapped in a black leather belt, and the full LED light set, which also involves a low-set headlight and instrument cluster and a shorter, slimmer rear mudguard. All this, as well as brand-new “bar end” rear view mirrors, gives the Stone S a streamlined, dynamic profile.
Another sporty touch is provided by the numerous red details, namely the ever-present Eagle on both sides of the fuel tank, the shock absorber springs, and the elegant red stitching that enhances the special dedicated saddle, upholstered in water-repellent Alcantara®. Equipment also includes a locking fuel cap, in black anodised machined from solid aluminium, and side panels, also aluminium and with a dedicated logo.
The mechanics also boast a refined appearance, the throttle body covers in natural anodized aluminium and the cylinder heads flaunting milled cooling fins.
Moto Guzzi V7 III Stone S also adopts new high-performance Dunlop Arrowmax Streetsmart tyres, which enhance the dynamic qualities of the Mandello “seven-fifty”.

Born in 2010, Moto Guzzi V7 Racer has always been the ambassador of the V7 range, the bike with the sportiest spirit of all. V7 III Racer 10th Anniversary celebrates this first decade with an updated look that continues the tradition.
The new V7 III Racer version differs significantly from its predecessor in terms of its front end, which stands out for the new top fairing with incorporated windshield, in authentic Café Racer style. The top fairing is enhanced with dedicated red graphics - also picked up on the saddle cover hump - which flaunt the “10th Anniversary” celebratory detail. At the centre of the top fairing is the new, full LED headlamp, while the tail light and turn indicators are also LED. A modern and dynamic look that is also emphasised by a thinner, sleeker rear mudguard, and by brand-new “bar end” rear view mirrors.
Numerous style features hark back to previous versions of the Mandello Café Racer, all tributes to its ten-year heritage. The fuel tank returns to the beautiful glossy chrome that characterised the original 2010 model, whereas other distinctive V7 Racer and V7 II Racer traits reappear on the side racing number plates, namely the number 7 and the red trim with Italian flag detail.
Produced as always in a numbered edition, the V7 III Racer 10th Anniversary adopts new Dunlop Arrowmax Streetsmart tyres that are more high-performance, allowing the dynamic qualities of the Mandello Café Racer to be enjoyed to the full. 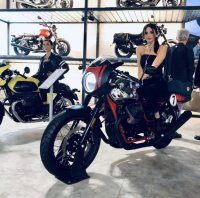 Nice enough but hardly enough to make me reach for my wallet.

You are likely right that the 100th is the more likely timing for any intro of a road-focused V-85. If, of course, there'll be one.

Even spotting them a few yards head start for quirky translations, the hacks who write this stuff wouldn't make it as third-tier wine-label poets.

Maybe I just missed something, but they seem to have mixed up Stone v. Racer descriptions. On a more positive note, I do like the yellow livery on the Stone. Again, my present moto-harem is just fine ... uhm ... but let's see what 2020 brings.

Bill Hagan said:
Maybe I just missed something, but they seem to have mixed up Stone v. Racer descriptions.
Click to expand...

Of course, re yellow (not)Stone. Doh.

This is the Stone S.

Did anyone else notice they removed the Ohlins from the 2020 Racer? They traded those for the fairing and bar end mirrors I guess(?). 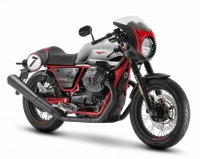 I will only consider trading in or selling my V7 Racer if they insert the v85 engine in the V7 frame. Other than that, I feel like it is useless to think about a V7 at its current state if you already own one.

I wonder if Guzzi will finish fitting that headlight properly in the fairing before shipping to customers.

Stone S looks awesome. I'd seriously consider that if I wanted a more upright riding position and didn't already have a V7III Racer. I think I like it better than the carbons and rough....

Because the V7 III is still a fantastic bike.

And probably because V85TT still sells good and keeps the little factory line busy. Milking the V85TT success as much as they can, and then introduce what everybody is waiting for - a V85 Lemans or V85 Griso or V85 «V7» when the mark celebrates 100 year anniversary.

The picture of the Stone S confirmed that when I order Todd’s 2-1 exhaust for my carbon shine, that I will go with black instead of polished.

I'm seeing a different bend on the head pipes of the yellow/black bike which is obviously the new Pepperoni Bros. model, I wonder if they will give me one?

Let's start off -- I am new to Moto Guzzi. They seem to release a lot of limited quantity bikes in the V7 line-up -- kindly correct me if I'm wrong.

IMO, my bike is much prettier and it has the Ohlin shocks. My bike does lack the cool headlight, and I like that front cowl around the headlight unit. However, my paint scheme is much prettier than this bike. I'm not a fan of chrome tanks.

Mayakovski said:
I wonder if Guzzi will finish fitting that headlight properly in the fairing before shipping to customers.
Click to expand...

I was kinda diggin that fairing until you made me notice that huge gap. Bummer...

I agree with Todd, it's too bad they didn't at least put out a Concept 2021 Le Mans this year, Maybe we're all just wishing for something that isn't really going to happen...

tonUPRacer said:
I agree with Todd, it's too bad they didn't at least put out a Concept 2021 Le Mans this year, Maybe we're all just wishing for something that isn't really going to happen...
Click to expand...