I've looked at two rocker arms from my 1978/79 1000SP so far (the others haven't surfaced). Both of them have a similar "failure mode". The 11mm-hex M8x1.0 jam nut can be loosened and backed off the pushrod adjuster screw without problem. The screw can then be screwed in (ball end closer to the rocker arm) without problem.

But trying to remove the screw sees it move a bit and then jam up solid. This happened on both screws. I looked at the screws with some magnification and when rotating them the screws don't show obvious signs of being bent, and the threads don't appear damaged.

My guess is that a prior owner cranked down on the jam nuts pretty hard, and there's some minor distortion on the threads "above" (the side with the jam nut) the rocker arm. It is probably over a short distance so the thin nut doesn't have any issues going over those threads, but once they are in the rocker arm which may also have a tighter clearance than the jam not, things get unhappy and stop moving.

I've cut one screw in half roughly where the jam nut was, and the portion with the ball end was then able to be unscrewed without jamming.

I'll be interested to see if the other two screws are the same way. Is this kind of issue something that is relatively common where someone may have gotten a bit eager on making sure the jam nut didn't come loose?

I literally just went through this on my 1200 Sport. The previous owner had put so much torque on the jam, that he actually marred the nut facings and the bolt literally snapped in half while on a ride! I had to cut a flat channel across the broken end of the adjuster bolt in order to remove it as the adjuster threads were mucked up from being over-torqued. When I installed the new one, it functioned perfectly again.

That jamb nut only needs the slightest tension on the jamb nut to hold it. Maybe 5 ft/lb at most.

You can get replacements at MG Cycle. I think I paid about $12. 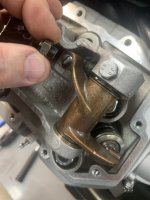 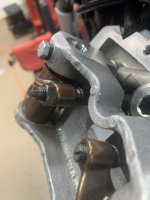 At least I didn't have to do the slot as I was able to grab the ball with vise grips and unscrew it. I've got at least one more to do, and I presume there's a good chance that when found the other two rocker arms will have the same issue. Even if they don't, I'll probably just replace all four and start off with a fresh set for "just in case".

Happened to my 1200 Sport which I had recently acquired from San Diego. Todd (owner of this site) was riding the bike at the time, and we were both amazed how tight the remaining nuts were.