Seeking a car that has all the grunt, feel, sound and acceleration as my V7 Special does. My Miataspeed doesn’t (maybe with an engine swap?). Other sports cars I have had seem mild compared to the Guzzi! What do you think?
R

Orion567 said:
Seeking a car that has all the grunt, feel, sound and acceleration as my V7 Special does. My Miataspeed doesn’t (maybe with an engine swap?). Other sports cars I have had seem mild compared to the Guzzi! What do you think?
Click to expand...

How bout a Morgan plus 4 or three wheeler? Those are two cars with a lot of character
O

Yes! All super cool and monsters. How about certain corvettes or Ferraris, etc.(more conventional)?

I'll tell you the fasted police cruise I drove was a 1973 Plymouth Fury III with a 440 V8 and police package. That car could catch anything on the road!!
O

I had a Mercedes SLK55 that could break free the tires at will but was too refined. My friend drove my Guzzi and said "it's like riding a wild animal"! Now that is a compliment and what I am after in a car.

Orion567 said:
I had a Mercedes SLK55 that could break free the tires at will but was too refined. My friend drove my Guzzi and said "it's like riding a wild animal"! Now that is a compliment and what I am after in a car.
Click to expand...

It comes down to budget. What do you have to work with? Motorcycle acceleration can be had, but it ain't cheap.
O

I do realize that we must pay for quality and it seems that nicely built classic's are at LEAST $30,000, and I am prepared to pay without getting crazy. I am waiting for the right first gen. Chevy II to appear and expecting it to have the muscle required while being a sleeper.

I am still looking for a supercharger kit for my straight six Grand Cherokee to make a full-time 4X4 sleeper. In the mean time, the electric car is pretty good for 0-60.

So I can’t shake this thread from my head… It keeps swirling around. As they say, with age comes a cage. Heh.
I’ve been a very fortunate and lucky guy to drive almost everything imaginable, from Ferraris to Lambos down to a KTM X-Bow all the way back up to the Veyron. However being a huge Porsche fan most of my life, the one that sticks the most is the $1-mil+ 918 Spyder Supercar (pick of me at the unveil in Monterey c2010 below). It’s one of the first I’ve ever driven on the track that truly reminded me of a Superbike. The 991-993 911 GT2 & GT3 comes in a very close second.
Coming back down to reality for the real world, I’d say anything that’s fairly lightweight with over 450 hp will put a smile on your face. Get close to or over 600+ European hp, and it will change your perception of what’s capable with 4-wheels.
That said, I grew up around the U.S. Drag Racing Circuit in my youth as my Dad was a street & bracket drag racer., so I ironically I have my eyes on the new Caddy CT5-V Blackwing (670 hp). It was developed on the Nürburgring, and all of my journo friends that know me well tell me it tops the best ever BMW M5. A 4-door ring-lapper that I can pick up friends and family at the airport, has major interest to me.
Stepping away from the production car world, I’ve been trying to see what’s surfaced in recent times with modern technology, and AF1’s landing page ironically has something the piqued my interest. The Griip G1 with a RSV4 motor with 200hp, but @$70k for a 4-wheeled toy, made me less interested.
However, I recently stumbled onto the one shown below, and reached out to them recently to see what one can realistically be completed for. We shall see. 600hp, 1100 lbs for $35k buy in is interesting to say the least.
As a side side note… Having my single engine fixed wing pilot’s license in the past, my real dream is the new Hill Helicopter. Google it if interested. 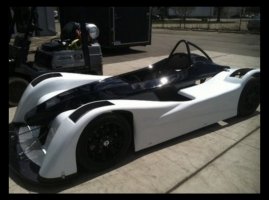 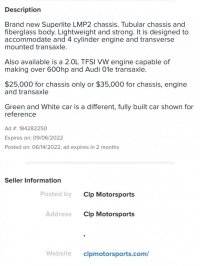 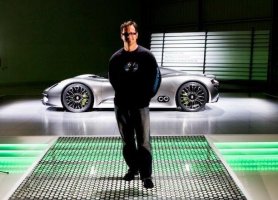 Nothing ever held a candle to my plain-Jane 300HP Porsche 911 Carrera for all around blasting up and down Mt. Palomar or a day at the track.

(Except…My very rich friends 911 GT2 RS which was truly spectacular in every regard but $300,000 which I could never ever afford).

However, if I had the money back then…my absolutely favorite automotive magazine photo, was of a Bentley Arnage T, smoking the tires off of the line.

Something about a gigantic nearly 6,000 pound weight, British ultra-luxury saloon car that could rip it up 0-62 in 5,5 seconds, instantly on command and all you need do was put your foot down.

The Arnage was a masterpiece of a car. Truly beautiful inside and out. I loved them.

I always told myself that someday, I will own a low mileage example. I’ve seen really nice ones for about $48k with 12-20k miles. Maybe someday but probably not likely as I find myself sizing down almost daily.

Many truly amazing vehicles at our point in time, for sure. My thoughts have me wondering which are suited as practical and non exotic as a daily driver. My question has urgency all of a sudden as my beloved '16 BMW Sportwagon is showing some dreaded electrical issues that have me thinking of a replacement. Blackwing? Wow! The new Accord is highly reviewed but it aint no Guzzi.

It started with a 2002 MINI Copper when they first came to Canada - bought one of the first in town off the show room floor.
Sway bars front and back, shocks and springs, Header, exhaust, CAM, ECU Tune, MUCH light wheels and tires ( than the factory Runflats ) - the thing would stick like crap to a blanke in the corners, and for 100+ HP did great in the twisties - then it dropped a valve...

Next was a 1990 Miata - all the suspension work , everything came off- didn't touch the engine - a Momentum car

All the cars did track days in the region and the MINI did some sessions on local tracks when we went to MINI Meets.

-- tend to spend our money on grandkids rather than automobiles. With 13 of those little shixes, that means that our cars are modest machines in cost and performance. So, I am guessing that our Fit fleet is not making pulse rates jump among readers of this thread.

In fact, the '09 Mini S 'vert in the garage behind those green doors is the closest to a performance focused machine we have ever had. And, it mostly sits there, rarely driven. Probably should sell it. But, as DeadEye knows, it has its charm.

Bill Hagan said:
In fact, the '09 Mini S 'vert in the garage behind those green doors is the closest to a performance focused machine we have ever had. And, it mostly sits there, rarely driven. Probably should sell it. But, as DeadEye knows, it has its charm.

Dayum Bill - have you‘se been to any of the MiniMeets ?
One East and West every year, one combined meet every 5.
Always the July 1st ish weekend…

panoramic photos from some of the meets…

If we're talking dream cars, that would be my brother's 1970 1/2 Camaro Z28. He's the original owner. It came with the 350HO but very early in it's life he swapped engines with his friend Gordon Dewar who raced Can-Am in the early 70's (look him up). Gord's spare engine, a 495 cu.in. aluminum block McLaren ended up in the Camaro. Everything on the car has been tuned and spec'd for speed and handling. Even the exhaust was custom made and tuned for the engine. Theoretically it's "street legal" but runs on high octane AV gas. Horsepower is in the 700-800 range and the torque is off the scale.
Sadly since he is now 79 years old, he sold it to an old friend who has been trying to buy it since about 1974. According to my brother he's one of the few people he knows that has enough knowledge to properly maintain and take care of it. I do not possess said skills.

Way off topic, but I like the reading -- @Orion567 had a ~$30k budget I was targeting. That's a tough one for motorcycle feel car unless it's old, then you lose handling, but that might still work for him.

This is perhaps my favorite sports car that I currently own; see yellow 992 S below. Believe it or not a close second is a 356 Speedster replica by Vintage Motorcars. I take delivery of the Ruby Red one below in October. 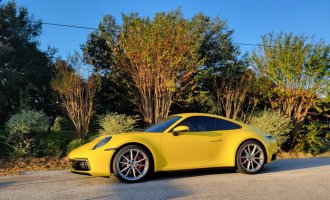 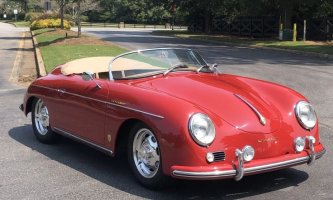 I was considering, trying to acquire one of those or a Beck Spider or an Intermechanica , but I don’t even know if I’d fit

As I’ve learned from Mr. Scott, motorcycles Take up WAY less space and are Much cheaper!
So are easier to collect !

GTM® said:
Way off topic, but I like the reading -- @Orion567 had a ~$30k budget I was targeting. That's a tough one for motorcycle feel unless it's old, then you lose handling, but that might still work for him.
Click to expand...