Surprising news. Mike was just in my shop a year or so ago. I raced with him in the early 90s, and it was fun to reconnect. He was walking with a cane, but said nothing about his health. Godspeed Mike. 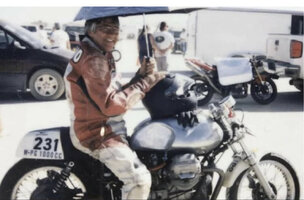 Michael A. Tiberio, 68, of Arlington, Virginia, passed peacefully at home on November 12, 2022. Despite surviving Hodgkin’s disease at 17, cancer surfaced once again.
A Phi Beta Kappa graduate of the University of Massachusetts Department of Geology, he also attended Boston College Department of Geology and Geophysics. His employ at MIT in Seismology led to a 42-year career as a Senior Scientist in Software Engineering.
Known to all for his limitless energy – he was a force who enjoyed every minute of every day. His Moto Guzzi love led to 4 National Titles, 160 trips to the Podium, and 3 years as a Top-10 AMA Pro Twins winner. Racing was the passion, but his skill at rebuilding engines and “modifying” motorcycles was legendary.
2017 brought a new passion: Land Speed Racing. On a dry lake bed in El Mirage, CA, he set a personal best of 141.69 mph.
Michael is survived by his wife of 34 years, Sondra; daughter, Robin (husband, Ryan Kerr); and son, Dominic. He is also survived by his two brothers, one sister, and many nieces and nephews.
Visitation will be December 3, 2022, from 1-4pm at Everly Funeral Home in Falls Church, VA.