First installed set below, thanks Jeff. Hopefully he'll post on how he likes it.

Looks real nice, a few ?'s if I may Todd:
Is there a crosssover?
These are single-wall from exhaust port to mufflers?
Do they come with new flanges or can reuse stock?
Utube with sound ?
Thanks

They look great! How do they compare/contrast with the shorty sport pipes I have?

Also, if I turn my bike into a tourer can I attach some of your long mufflers to the current headers, or does it require a whole different system?

GT-Rx® said:
First installed set below, thanks Jeff. Hopefully he'll post on how he likes it.

Todd, is there an appreciable difference in the noise level between the "short" and the "long" mufflers?

Quattroa4m said:
Todd, is there an appreciable difference in the noise level between the "short" and the "long" mufflers?
Click to expand...

Yes, sure is. Shorter versions are of course louder. If you want a quieter set of either, we can install a non-removable db-killer no charge.

GT-Rx® said:
Yes, sure is. Shorter versions are of course louder. If you want a quieter set of either, we can install a non-removable db-killer no charge.
Click to expand...

Do the db-killers affect performance at all??

ZClark73 said:
Do the db-killers affect performance at all??
Click to expand...

GT-Rx® said:
First installed set below, thanks Jeff. Hopefully he'll post on how he likes it.
Click to expand...

How do you remove the rear wheel? It looks like the entire exhaust system has to come off to pull the axle.

roadventure said:
How do you remove the rear wheel? It looks like the entire exhaust system has to come off to pull the axle.
Click to expand...

You have to do that for the stock mufflers. Not so with the shorties.

roadventure said:
How do you remove the rear wheel? It looks like the entire exhaust system has to come off to pull the axle.
Click to expand...

Perhaps I can see why you might think that, but seriously(?)... No one in their right mind would design an exhaust system that has to be completely removed to get to the rear wheel, aside from the fact it would be nearly impossible to install. My system comes apart at the blue tape shown above. We have designed a clamp-less set up now for all connections. The stock mufflers are the nightmare for this service, and many other simple maintenance items.

Okay, I did not know that is what the blue tape was indicating. Easier to get apart and service is a good thing.

I have one C14 Long/Full polished exhaust system (shown bottom pic) ready to ship. Free shipping in the lower 48 today only; https://www.guzzitech.com/store/product/gt-rx-california-1400-full-stainless-exhaust-system/
I also have over three (3) H-pipes in stock; https://www.guzzitech.com/store/product/california-1400-gt-rx-h-pipe/ -- and will complete the headers to mate them to any muffler (stock or aftermarket) within a week. 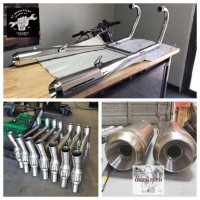 I rode my 2014 Ca 1400 Touring 130 miles to Todd's shop in Orange last Thursday to have him install his long version stainless exhaust system and also the fueling modifications. I was hoping that this would take care of a few gripes I had about my bike. First was the exhaust sound or lack thereof. In stock form I think the 1400 sounds more like a Japanese compact car than a motorcycle. To make matters worse the exhaust shields always tend to make a tinny vibrating noise even when they are fully tight. Very annoying! I also was bothered by what seemed like a one or two second lag on the throttle which was especially noticeable when shifting. I couldn't help but notice that Todd is elevated practically to God status on this board so I decided to give a couple of his modifications a try.

He made a good first impression. His shop is ALL about Guzzi. No other bikes, all Guzzi. I like that because I like dealing with specialists and this guy has been around and clearly knows these bikes, and secondly Todd is a really nice guy who treats you more like a guest than a customer. I like that too. I knew my bike was in good hands and I expected good results. I didn't expect him to throw in a couple modifications for free tho but he did. He not only fixed the "moaning whale" he also made a couple of modifications to the air box to make it breath better.

I knew it would be a fun ride home even tho it was all crowded southern Ca highway.
The sound was music to my ears. I can only describe it as a throaty rumble but quick revving like a sports bike. The second thing I noticed was that the engine was running cooler. Much less heat on the legs even tho it was 88 degrees, 15 degrees warmer that when I rode down. Other that that the ride home was a little anti-climatic. I knew I had to get it out on the open road to really give it a test.

So that's what I did the last two mornings. This morning especially the bike revealed itself to me. I headed up a curvy mountain highway behind my home. The bike felt so light. Well yeah, this pipe is thirty pounds lighter and it's noticeable! I can't get over the difference in throttle response and power. I couldn't stop revving this thing. The sound of this bike at 85 or 90 miles an hour is glorious. Todd's dyno results showed about a 20 HP increase with these modifications. Sounds about right.

My Guzzi had been sitting a lot since I got a new Ducati Xdiavel in February. Now all I can think about is getting back on the Guzzi. Im realizing now how lucky I am to have this shop within riding distance and how lucky we all are to have this guy, this Moto Guzzi Wizard available to us on this forum.

Guys, you are killing me...

Geez Todd, I was referring to the post you made on the 4th of July and as to whether or not that particular item was still available and ready to ship, or would it need to be manufactured because the store states back-ordered. I've been watching them and I know where the store is and I also see that it went up $100. Why do you need to try to make me feel bad for asking a question? I'm trying to buy something from you here.
Respectfully,
Tom

Tom, sorry, your question obviously wasn't clear. I thought you were asking if it was still available, as in for sale. Yes. I sold the last one on the shelf to Curt above.
Stainless costs keep going up, so I'm trying to not lose money on these hand built systems.
I field hundreds of emails daily asking about product info and availability which is all on my online Store. The pic below is from yesterday. The tall mufflers are long 1400. Shorts are V7III. I have ten (10) sets of GT 1400 headers and H-pipes done and on the shelf. The shorty 1400 mufflers are next. 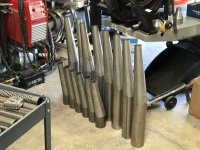 Thank you Todd. Fantastic work. I'll order the polished long tour for the 1400. It's for the Eldorado I just purchased. Gas mileage is horrible. Looking forward to doing business with you. Off to the store now...