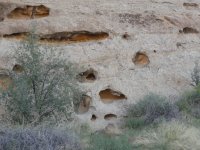 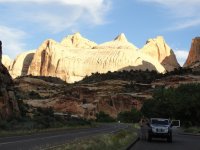 vagrant said:
You have no idea what a challenge that is for me. I am the reverse of you and Daniel. I stop at a pull off and take a scenery pic every couple of days that never has a road in it. However my ugly mug with a cigar hanging out of it and a river or a lake running through my brain is common. next I never mark them for location or year.
But seeing as what is coming up next is for sure of my 2014 super blue II Goldwing trip and I found this spot so intriguing I remember snapping pics in every direction. so I will do 1 a day, or maybe a week until somebody gets it right.
Oh and before you ask super blue 1 was a 1954 buick painted with Chevelle Marina blue paint and 3 is of course the 2017 blue special V7 III.
Click to expand...

here are 2 more the one without the Jeep is sleeping accommodations.
yes I know my computer / forum skills suck.

vagrant said:
here are 2 more the one without the Jeep is sleeping accommodations.
yes I know my computer / forum skills suck.
Click to expand...

Let me confirm that for you.

OTOH, nice pix, even if double-taps.

Will study and thunk on 'em.

I love that area; it's one of the best in the country. The ride along highway 12 and then highway 24 through the Escalante and then Capitol Reef (where your photograph was taken) is just one stunning view after the next. Highway 12 is one of the few roads that has a sharp drop-off on both sides of the road. Take it easy on that one. Lordy, Daniel, you remind me of Steve Farson's take on thatJohnny Cash classic:

I sometimes think that you really HAVE been everywhere.

Curious where next you take us.

And, don't listen to Daniel, Steve. I say go for the gusto and ride that stretch WFO.

Do wear a Go-Pro. 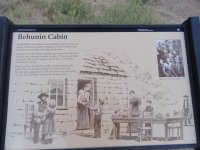 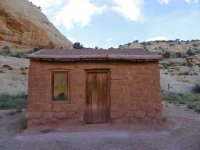 I figured you'd get it with that clue. I wish my memory worked that well.
Capitol reef park. also one of those places where you had best pay attention to the fuel supply.
When you read the sign it makes you appreciate how well off we are.

I'll add a few hints to help make it solvable: People speak English, but even so, you might have trouble understanding them. There are a couple of sheep next to the road. Also, this land was once heavily mined, but those scars have mostly healed by now. It often seems that pretty much everybody has the same last name. Speak English as a primary language? That would odd as only places that (immediately) come to mind -- no homonym intended!

But "heavily mined?" My Army background had me thinking as in the explosive sort -- and none of the foregoing candidates fit neatly into that set -- but then I realized you probably meant of digging and quarrying of minerals. Hmmmm, again, as all of the above, even Belize, I think, have some history of that.

) and pack for Atlanta, I'd delve deeper.

Oh, and that pavement looks mighty nice, too.

Bill, there's a movie that takes place very near this spot (I'm guessing) that is perhaps more (in)famous for having beat out Citizen Kane for the Best Picture Oscar. Years later, Citizen Kane is regarded as one of the best films of all time and the other movie is hardly known at all. I've given way too many hints--you hardly need to see the photograph.


By the way--Tasmania would be a pretty good guess (parts look familiar to the photo), but it's not Tasmania.
Last edited: Feb 14, 2018

Daniel Kalal said:
I'll add a few hints to help make it solvable: People speak English, but even so, you might have trouble understanding them. There are a couple of sheep next to the road. Also, this land was once heavily mined, but those scars have mostly healed by now. It often seems that pretty much everybody has the same last name.
Click to expand...

NOT in the U.S. Wrong color road markings...

roadventure said:
NOT in the U.S. Wrong color road markings...
Click to expand...

With those hints, I'm not sure you wouldn't have had it even without the picture. The language is English (mostly and sort of), the very common last name is "Jones", the movie is "How Green was my Valley" and you'll see abandoned coal mines all over.

Are you in Spain? Let's try this:
First hint: Spain
So, let's see if we can identify the autonomous community. Daniel Kalal said:
With those hints, I'm not sure you wouldn't have had it even without the picture. The language is English (mostly and sort of), the very common last name is "Jones", the movie is "How Green was my Valley" and you'll see abandoned coal mines all over.

Are you in Spain? Let's try this:
First hint: Spain
So, let's see if we can identify the autonomous community.

I am but not mainland. Would autonomous community hint at the Basque Country?
Last edited: Feb 18, 2018

just a bit south of that.

All of Spain is made up of "autonomous communities." In hindsight, that might not have been the best name to use (for what would be "states" in the U.S.) as it would encourage any (and all) of them to assume that they were already halfway to being fully independent, so they might as well go for it...

Here’s a restart. I didn’t go back through all the old posts, but pretty sure this is new here.

Certainly not a BRP gimme pic or the like, but the backdrop is a well-known landmark in the Southeast USA. And, while somewhat boring technically, this is taken along a well-travelled and very scenic moto road.

Not even a guess.

Took that three years ago on return to top of Virginia from Atlanta.

The ascent up U.S. 276 starts nearby and is great fun. On that trip, a short convoy of The Motor Company folks did not appreciate me passing them and tried to prevent that. Still succeeded. Safely, BTW, without any "challenging;" well, not beyond the pass itself. C'est la vie for them.

Ah, but you don't get away that easily.

Another iconic point in SE USA.

Very impressive ... especially for a Yankee.

That was at "Nose-end Rock" on U.S. 221 south of Blowing Rock near, as you note, Linville.

I like the BRP. Lots. But, as it seems you already well know, that section of U.S. 221 (among others) is way more "interesting" than the BRP.

I was once stooopid enough to get into a "I'm faster" event -- that has a "nose-end" twist -- with a local near that rock.

This was about 15 years ago.

The other "contestant" was a newish Toyota pickup driven by a comely young lass who had likely driven that section of blacktop all her life. I was on my Ballabio. The road was wet. She was also no stranger to testosteronic males -- even of the rather senior type as I was and am. But, with my ATGATT and red machine, all she knew was that I was of the moto persuasion and needed humbling. She almost succeeded.

We were both probably wishing we could call it a draw as nothig good was going to come of this when she lost control, did a 180 and more in the roadway, and came to a sliding halt on the wrong side of the road. Happily, no traffic either way during this whole theater of madness. I stopped a few feet from her in my lane. No ABS on that V11, so it was a near thing in that, too.

We just stared at each other. Then, in that wonderfully winsome way women can have when it pleases them, she grinned, blew me a kiss, and just drove off in the opposite direction.

I'll never forget that. I hope she has had a wonderful (and safe) life since.

Yep', I don't reckon I've been 'round them parts since...
OK, you got me!
I've never been there, but I'm Heck-on-wheels at thet thar Googlin'!

I just wanted to hear the story, and see the next road!