scottmastrocinque said:
If this is indeed the case then I would change over to the master cylinder that I could buy a rebuild kit for it at the same time…
Click to expand...

Seems to me you’ve figured it out. I’d change out to a 11 mm master cylinder then.

good idea, but smaller cylinder would not give less braking power?

No. It is exactly the opposite. You will actually increase the maximum pressure.

It practical application though, you will never notice any difference.

The only issue may be the brake line.

I believe it should fit but it may not. Just check it carefully.
Last edited: Sep 13, 2022

Please take photos and return to post your work so others can benefit from your experience.

Petyus said:
good idea, but smaller cylinder would not give less braking power?
Click to expand...

As Scott pointed out, the smaller piston will result in less applied force to achieve the same braking "power".

But the smaller bore MC will result in more brake lever travel, so make sure you have adequate clearance for this additional travel.

It’s the rear brake. Travel is not really an issue. I’m positive he will be able to lock up the rear wheel if he so desired.

PS 13 B cylinder is on the way. I will make photos of the replacement and tell the results. I might change the pads also from SA to LA (Brembo), it says the friction coeff with these pads are 0,7-0,8 (it increases with the temperature) while the SA is below 0,6 (temp. independent). It seems to me a good improvement.

Well, story is happy ended.
I tell the whole from the beginning.
So I went for a training course and during the excersises the rear brake went off(after excessive usage), then back after a while,
when it cooled down.
I thought it was the time for brake fluid replacement.
I took the bike to a mechanic for the job and when he wanted to bleed the rear brake,
no brake fluid nor air came at the rear brake.
It looked like the master cylinder able to push the brake fluid to the ABS module, so
the mechanic thought the ABS module faulty.
So then I took off the module and sent for repair, but the repair shop told the module was in working order.
That was the moment when I came to this forum for help.
Upon Scott's advice I disassembled the master cylinder, cleaned well and after the cleaning the
cylinder was able to push the brake fluid to the rear brake, but still I was not able to bleed, no air were coming,
but the brake lever was damn soft and the brake did not work.
Then I decided to buy a rebuild kit, but it turned out soon that there is no rebuild kit for this cyinder.
The only way was to order a new. You can go for the OEM cylinder or the universal , I ordered the universal,
not because it was cheaper but the lead time was less.
The universal cylinder is PS 13 B.
The only thing I had to pry out the original fitting and put it in the new cylinder. See the photo, the upper the new cylinder.
Okay , I thought this is the way, but when I wanted to bleed the brake, nothing. No air were coming from the bleeding nipple only brake fluid and the brake was soft...
So I felt kinda stucked.
Then with anger I started pumping the brake lever, and turned the bleeding screw under pressure not only quarter turn but half or more.
I pumped the lever 10 times, then turned abruptly the bleeding nipple half turn or more .
After the 3rd or 4th attempt a big bubble of air were visible in the attached pipe!!
That was really promising so I went on, as long as no air bubbles were coming.
Then the brake felt really sharp.
I think if I had done the bleeding process the same way with the cleaned cylinder as I did with the new cylinder the old cylinder would have worked also.
Nevertheless I am happy with the result, the lesson learned, when bleeding the brakes, the bleeding nipple should be turned sudden and at least half a turn.
I hope I could help someone with this experience. 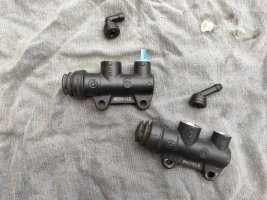