I vented my tank and when disconnecting the line only got around 10 - 15 ml of fuel. Had a rag there anyway because I expected more.

Ill give it a try in the spring after I run the *Winter* gas out of the tank.
Maybe I should keep watching the Video and try some visualization of taking the assembly out in my sleep...

the 2017 is different. no problem at all and no pressure relief needed. just push in and pull it apart. actually, my 2015 was almost as easy.

The fuel tank removal/reinstall is a simple task, but simple isn't always easy. The lack of familiarity with doing the task makes it more difficult than it would be if I had done it many times before.

It's a lot of working in cramped spaces, getting your arms around and under a tank with very little clearance, to disconnect and then reconnect everything.

Then, once you get it off you have to deal with taking the fuel pump out of the tank. It's once again, simple but not necessarily easy for those unfamiliar with the task. I had to be a little less than gentle with mine to get it removed. I found I was babying the pump too much, you have to wiggle it so the fuel lines clear the tank sides, and that took a little more effort than "barely moving it" - just carefully watch every move you make, and be careful. Applying sufficient pressure to get the pump out is not the same as carelessly brute forcing things around. Be an iron fist in a silk glove, is the general idea.
J

DominoDoggy said:
Another V7 with its plastic fuel filter where it belongs - in the GARBAGE!
This is from my 2014 model, bulging and soft. Good to get it replaced. 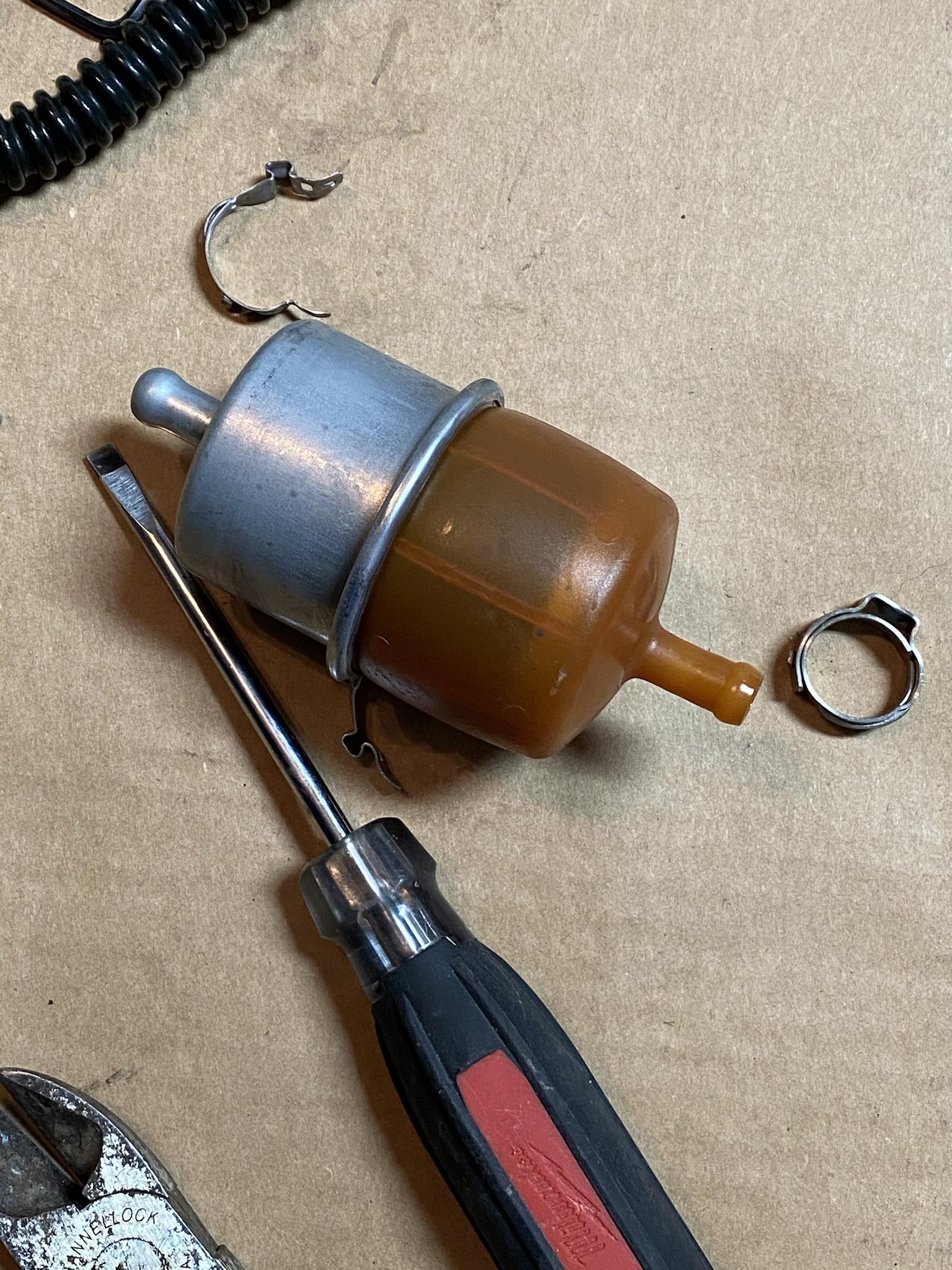 Are those the Oeticker clamps? If so, are they the 11.3 size? if so, do you have a part# for them by chance?

Also, do you need the branded Oeticker tool to install those or will any set of pliers work? I've read conflicting stories.

Those are 1/2 inch Oetiker style clamps, I'm not sure of the metric size. I got the tool with clamps from Amazon, it was sold as "IWISS Pex Pipe Clamp Cinch Tool for Stainless Steel Clamps 3/8 inch to 1 inch with 1/2 inch 20pcs and 3/4 inch 10pcs SS Pex Clamps" you can likely search for that exact title and find it.

I replaced the nylon fuel line on the pump assembly with good quality new 5/16" internal diameter (half inch outer diameter) high pressure fuel hose, and the 1/2" clamps worked perfectly. The 1/2" clamps that came with my tool purchase were too large for the original nylon fuel hose so I went ahead and replaced it because I couldn't source smaller clamps locally. Figured it was a good time to replace the six-year old fuel line in the pump anyway, hopefully I'll never have to open it again.

You can source 3/8" Pex Clamps from Amazon as well which would likely work with the OEM fuel lines.

I hope you bought the "high class" submersible fuel line.

I hope so too. I couldn't find a lot of specs on what I got but, what I did find states "resists permeation" and I specifically told NAPA that I needed an in-tank submersible 5/16" ID line and this is what they brought me...

If anyone familiar with SAE 30R14T2 fuel line knows for sure, please let me know here for myself and others. I don't want to tear back into the fuel tank again but, I'll do it for sure. It wouldn't hurt to re-familiarize myself with the task!

If you search around for that number its seems its specifically rated for ethanol / methanol submersion.
Last edited: Apr 16, 2021

morpheous said:
Push what in? DO you have pictures?
Click to expand...

James Dixon said:
Are those the Oeticker clamps? If so, are they the 11.3 size? if so, do you have a part# for them by chance?

Also, do you need the branded Oeticker tool to install those or will any set of pliers work? I've read conflicting stories.

I'm reading mixed information on various forums about the correct size of the Oetiker clamps required.

I know our host sells a kit which is great, but I'm in Canada and the cost of shipping a filter and clamps is a bit cost prohibitive in this particular scenario. I have to make a big part order in a few months and I could just toss the kit onto that, but this is something I would like to get sorted out right away.

I've ordered a replacement filter. Any suggestions for the best way to empty the full tank prior to removal?

Ken Bracewell said:
I've ordered a replacement filter. Any suggestions for the best way to empty the full tank prior to removal?
Click to expand...

I rode mine around until it was about empty.
K

aproud1 said:
I rode mine around until it was about empty.
Click to expand...

That's not an option as the filter is split and the bike isn't running.

You will have to siphon the petrol out or remove the tank and pour it out.

Ken Bracewell said:
That's not an option as the filter is split and the bike isn't running.
Click to expand...

Sorry, That's not fun. Should be able to do a simple siphon with a hose into a container.

Ken Bracewell said:
That's not an option as the filter is split and the bike isn't running.
Click to expand...