Bob Ponticelli said:
I put fewer miles on mine than almost anyone. ~1,400 after 24 months. I commute to work on it daily however. Issue is I work 2 miles from home. Weekends are filled with a variety of interests like running, tennis, golf, tandem bicycling, and I try to fit a ride on my V7 in there somewhere......we usually take it to tennis. :>
Click to expand...

Sounds like a pretty full life Bob! At least your getting on the bike every day even if only 2 miles. Have to say I'm jealous. I only have a 14 mile commute, but it is a straight shot on a congested 2 lane road. Not fun in the heat on any MC, much less an air cooled one. Cheers!

Hey guys, haven't had time to upload on the registry yet, too busy riding!

My friend decided to go the triumph route instead.

if that's the new bobber he won't be too happy with that tiny gas tank after the V7.

Took delivery of the Mk III late yesterday. Just got a short spin on it, but some quick notes:
Refinement, refinement, refinement. And it's really showing. Engine power (with 3 miles on it) is much improved over even the Mk II. In addition to the notes on the post above, the fueling is start and ride away; Light years better than any previously. Lively motor power wise... a touch less "grunt" than the 850cc V9, but still signs off fairly early like the Heron head I & II.
The new shorter (repositioned) KYB rear shocks are also markedly improved, not great, but better. Forks are the same horrible Kaifa units.
What is evident is the platform sharing hardware. Same (oddly larger) triple trees (hence longer wheelbase and motor to tire gap), as well as footgear from the V9. Frustratingly enough they kept the old frame/narrow swingarm & wheels. Why not go to modern sizes and width finally?
The new seat is lower and better padded with a really nice thick seat material. The lower seat makes the tank feel larger. It's the same size of course. I'll be posting some more notes after I get some miles on it. Then off to the dyno and digging into the exhaust and related.
It will of course be plugged into the RentAGuzzi Fleet shortly as well (click pic below).
Anyone want our V7 II Stone? It is now up for sale, and is running the best it ever has. Contact me for details or I'll be sticking it on the Classifieds here soon.

My newly rescued and adopted V7 at home in the Adirondacks for a free range lifestyle with plenty of land and roads for exercise. 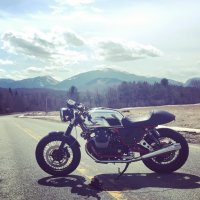 Oh and I really like the color black... so I've wrapped exhaust as well since that photo. 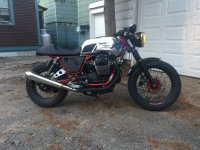 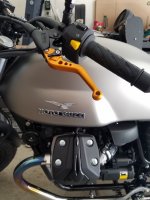 Nice. Do you like the Pazzo Shorty's? I just added to my 2014 and took a couple days to get use to the short clutch......no diff noticed on the short brake.

Bob Ponticelli said:
Nice. Do you like the Pazzo Shorty's? I just added to my 2014 and took a couple days to get use to the short clutch......no diff noticed on the short brake.
Click to expand...

It's adjustable and is now set to 5 and I like it a lot. At first I tried settings 1-3 and that was too short for my liking. BTW, lovely bike you got there

ToyGuzzi said:
It's adjustable and is now set to 5 and I like it a lot. At first I tried settings 1-3 and that was too short for my liking. BTW, lovely bike you got there

Mine is set to 5 as well. Congrats on your new ride and thx....done many little tweaks. The nice thing about these are that they are inexpensive and IMO allows you to add some "toys" without really breaking the bank. 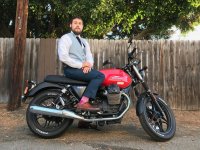 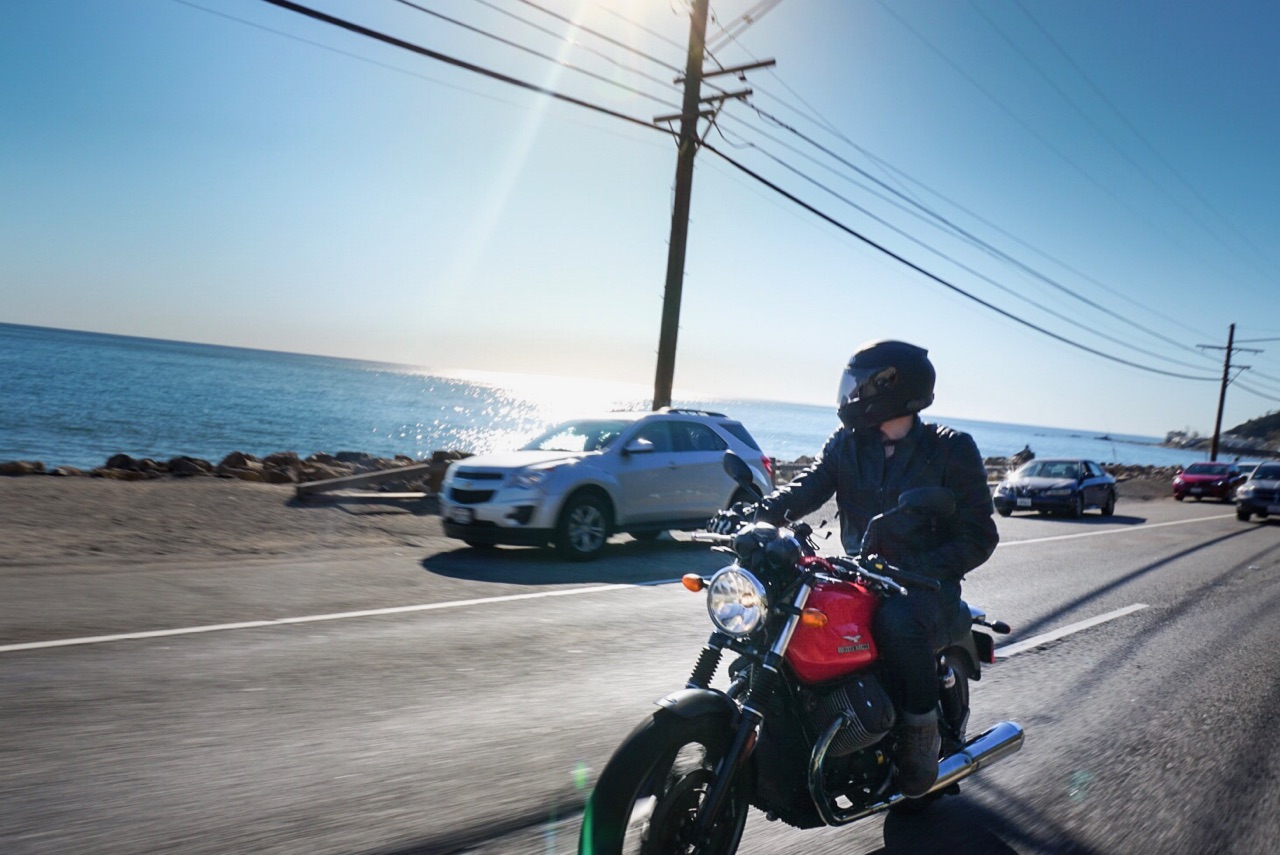 Kyuss said:
My newly rescued and adopted V7 at home in the Adirondacks for a free range lifestyle with plenty of land and roads for exercise.
Click to expand...

Nice, congrats! My Guzzi Jackal started it's life in New England including the Guzzi Rally in your area back then.
Can you post the VIN# and info for the first post of the thread?

Congrats and welcome to the GT Forum and Guzzi Famiglia.
Hope you'll post your full info for the first post if this thread including VIN#.

My '09 Classic that used to be White:

Thinking of buying a Stornello to park next to it. Have a call in to a dealer now.

Here I am on my 2016 V7II Stone after installing the two-up Corbin seat and Hepco & Becker bags.

stokes said:
whats with the vin #'s?
Click to expand...

It just helps keep track of the owner for questions or for (fun) interest down the road to see where your bike has lived since new. On the big blocks, having access to the previous owners may come in handy for the User Codes to access the ECU/Dash.
There are many Registries like it all over the World for other items and brands.

stokes said:
Ok,just for the fun.... I can see posting pics and talking a bit about your bike,but whats with the vin #'s?
Click to expand...

It could also be useful in the event that a bike is stolen, everyone on the forum would have that VIN and be able to check for any suspicious sales in their area.

Had her out today running a quick errand for the first time after the reflash. All I can say is she is a total
blast to ride. Can't wait to see how she performs after the suspension upgrades.