For those naïve to the Ozzie drunkards... read for yourself: 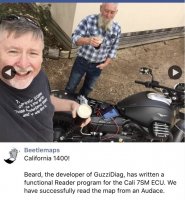 Share it, no. Resell it, yes. Without a base map for the 1400, you would be nowhere. I’ve heard you stopped selling your trash to 1400 and V85TT users since you stuffed those up. Congrats.

First off, Beard didn't "develop" Diag, a Frenchman did; jpdiag.akress.com - Beard just rebranded it to start. He seems to be a stand up guy, though I've never met him, I've traded several emails with him to help me lock down my intellectual property.

BeetleDung: You don't know me at all. You keep doing what you do so that I can keep doing what I do. Fix your garbage. You are the king thief of maps... which you accused me of; Let me be very clear, I don't want your garbage. Free and easy access software has made everyone, like you, an "expert." Preying on the naïve with a cheap product is your gig, stick with it until you finally blow someone's motor up. Fuel stalling motors on closed throttle is simply asinine.
Spouting off what you think I do, which you are still pathetically and clearly clueless about. Only sad little egomaniacal turds obtain things with intent purely to criticize and shout all over the net of how great they are, because everything else is terrible.
Speaking of a charlatan who hides behind some lame name game with no web presence outside of slithering around other peoples sites and Faceplant. Do me a favor... Forget who I am and take your girlfriend Roper with you.
Which Roper, doubtful you'll wake from your stupor. A decade plus of this is enough. I'll keep cranking out quality products and work from my incredibly busy workshop. You keep making yourself look like a fool here and elsewhere online. Everyone sees right through your ego, arrogance and stupidity. Your baffle plate I tried was sheet steel, poorly cut, which leaked from day one. I yanked it and tossed it immediately.
Fact: World record holders, race track grids and 100's of thousands of people around the world still utilize Dynojet's amazing products. But again, you are better, clearly. But you two must be far superior to even Marelli in what they do, so maybe we'll see you in the MotoGP paddock one day.

I own and manage a legit fully staffed work and fab shop (for well over six years now) that builds and services Guzzis, full time. Thanks to Dynojet, I've been fueling Guzzis since late 2001, when I trained professionally with them. I own a dyno, which I document all of my work, as I have done nearly two decades. You? I build full custom bikes, frame up. You? I have strong running machines from big bore 820cc V7s up to 1440cc 8V motors, and a supercharged 1151cc motor that made 167 RWHP. You? Right.
If I were like you two, which thankfully I'm not, I would be telling people to post here that tired of the disasters you've created. They are lined up outside of my shop to resolve your work, and fill my Inbox daily. So keep it up, well done.
You must log in or register to reply here.
Share:
Facebook Twitter Reddit Pinterest Tumblr WhatsApp Email Share Link
Top